Last Saturday, 26A, thousands of people went out on the streets of Barcelona, gathering together because of the same reason: terrorist attacks on 17A in Les Rambles de Catalunya, a heart-felt street for all Barcelona citizens. People in the city wanted to show rejection of the attack, and show support for the victims and their families.

However, not all people on the streets used the peaceful demonstration for the same purpose. More than 70 associations, among them AHEAD, took the chance to denounce the hypocrisy of those political leaders and representatives present in the march, who promote wars and foster armed conflicts with their policies. Also, those who breach in their commitment to give assylum.

For that reason, organised society, chose blue color, the symbol of the Mediterranean sea, the sea we live all toghether around, and a sea that has also seen too many deaths already. On Saturday we went on the streets in blue (#anemdeblau) in favour of peace and life, all lifes!

For more details on the manifesto see documents in English, in French and Spanish. 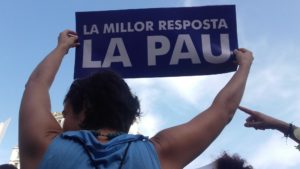